The Law was our Schoolmaster

Moses with the Law

"Wherefore the law was our schoolmaster to bring us unto Christ, that we might be justified by faith" (Gal. 3:24, KJV). It is interesting to discover that God instituted the Levitical law for the purpose of walking us to the feet of Christ. It was never intended to be an eternal covenant by the simple fact that it was a conditional (if-then) covenant. Any covenant with conditions can be nullified by the person who breaks the terms of the covenant. And as Bible history clearly shows, the Jewish nation broke the terms of the covenant repeatedly.
But, as Paul explains in Galatians, the law was given for the purpose of showing wayward people their need for something better than the law. It was God's plan to provide grace as a gift at just the right time through his one and only Son and his finished work on the cross. In fact, I love Paul's words in Colossians concerning the written code of the law when he wrote in Colossians 2:14 (NIV) having canceled the written code, with its regulations, that was against us and that stood opposed to us; he took it away, nailing it to the cross. We see then, that the law served the same function as the household slave who walks the children to school and deposits them into the presence of the teacher. That is what a "pedagogos" was; not the teacher himself, but merely, the slave who took the children to the place where they could be taught. The Levitical law walked us wayward children into the presence of Christ by revealing to us that we were ill equipped to keep the law in and of ourselves. In fact, attempting to keep the law was never anything other than an effort in futility. But until we tried and failed, we didn't realize how badly we were in need of imparted grace and imputed righteousness that only Christ could give. Praise God! The schoolmaster has finished its work. It has walked us up to the foot of the cross and deposited us at the feet of the Lamb of God who took away the sin of the world. The master has come, so the slave is no longer needed. Now we are justified by faith apart from the law! 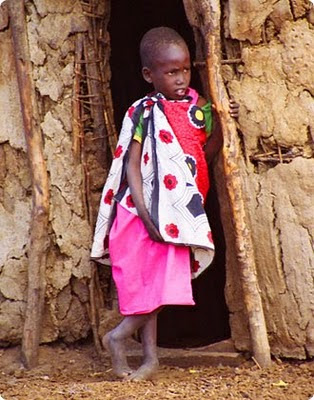 Maasai girl standing in the door of her family hut
I received an a-mail today from a friend in ministry who has served in missionary work among tribal people in Africa. He was back among the people he had ministered to for about two decades finishing up a Bible translation project and working with a long term native ministry partner. He mentioned in his e-mail that he had just finished preaching the "most embarrassing sermon" he had ever preached to these tribal people concerning a topic he had avoided for all his years on the field. His tribal friend had begged him to preach to his people about female circumcision after his own daughter was taken against his will and secretly circumcised without his permission. This practice, normally carried out largely in Muslim circles all over Africa and the middle east, would be considered child abuse if it were practiced here. I won't get into the details of this in this blog, but you can Google it if you want more information. My friend concluded his e-mail with these words, "It may be a while before the subject is fully worked out among the people here. Maybe a generation, maybe this generation. Pray for God to give us all wisdom."
I wrote back to the brother who sent the e-mail to encourage him for dealing with such a difficult task. I had observed the same issue while visiting missionaries in Kenya who were working among Maasai tribals in the Mara area of west Kenya. Along with female circumcision, they also had another similar issue regarding a common practice of removing the two bottom teeth of Maasai children. Back when that practice started, removal of the two middle bottom teeth allowed a straw to be inserted into the mouth of a person suffering with lock-jaw so they could get nourishment in spite of the disease. But no one has suffered lock-jaw there for nearly a century. Still the practice persists today, and children are taken, without warning, and a spoon is inserted between the bottom teeth, and the two teeth are literally scooped out without anesthetic by a man in the tribe who has become proficient at the primitive tooth extraction method. It amounts to child abuse in my mind, but looking at Maasai tribals, evidently all of them have gone through the procedure.
I mentioned to my friend that both female circumcision and lower tooth removal amount to tribally approved forms of child abuse. It may be seen as appropriate by change-averse tribal
people, but it is a poor exhibition of what Christ can do to change inappropriate behaviors. I call to mind the oriental practice of foot-binding that is no longer endured by girls. Even non-Christians can eventually catch on as to what is harmful and unloving practice to foist on children in the name of tradition. I applaud my friend for bringing it up, uncomfortable though it may have been. Female circumcision is a middle-eastern (Muslim) abomination. The sooner it is stopped the better. It took William Wilberforce a lifetime to abolish slavery in the UK, but it was worth all the effort and time on his part. Girls and women in Africa and the Middle-East will thank those who speak up against such barbaric practices in the years to come. We must not be embarrassed to speak out for the innocent ones subjected to foolish practices in the name of tradition.
Posted by Ed Skidmore at 2:12 PM 125 comments: