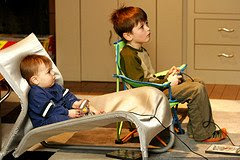 Teaching a lesson today, I was reminded about something from my former youth ministry days many years ago. There were a couple of boys in the church I served who generally came to church with their parents, but who never participated in any youth group activities or other church events. I invited them to participate but they never showed any interest. I asked their mother about the situation and she finally confessed that both boys preferred to stay home and watch TV and play video games over going anywhere and doing anything outside the home. It wasn't just a disinterest in church functions or youth events. These boys never went out doors to do anything. I don't know what ever happened to them, but I lamented being upstaged by a cathode ray tube attached to a TV tuner or a game controller.

Since that time computers have been added to the arsenal along with mp3 players, game boys, cell phones, Wii, X-box, etc. Everything seems to have a video screen attached to it. The lure of the screen equipped device seems almost irresistible. I have a young grandson who loves to play Super Mario. Since we aren't equipped with that game at our house, I'm not sure how he will be able to subsist visiting our place without it being available.

I've said all that to present this point. The video screens on all these devices provide a visual medium for today's society that could be reminiscent of the idolatry of Old Testament times. Read anywhere in Old Testament history and you will notice the proliferation of household idols. A good example of this would Be Jacob, Leah, and Rachael's departure from Laban in Genesis 31. Among all the other things we read in the text, we discover that Rachael stole her father's household gods, and the implication is that she took them because she felt entitled to them because her father had mistreated her husband. The idols represented some of the household wealth, and Laban made a point of inquiring as to the whereabouts of the household gods. Folks back then didn't have access to videos, but I would assert that hand held idols were the closest thing to a game boy available back then. Idols were a visual representation, an action figure of sorts, to the metaphysical realm. Not only were they considered valuable, but they were evidently in continual use. Never mind that when the 10 commandments were handed down from Mt. Sinai, that prohibitions on Idolatry were among the first pronouncements.

Taking the argument a step further, we know that these visual mediums can also be used for easy access to pornography and other improper entertainments which again raises the usage of idols back in the Old Testament. The "detestable gods of the Canaanites" were considered detestable because of their connection to sexual activity, infanticide, and other improper and depraved activities. I find it difficult to see how Israelites could be so easily tempted to participate in the religious activities of their Pagan neighbors. The idols provided a medium for depravity and wickedness. Likewise, I fear that the visual idols of our day have a potential for evil beyond imagination. I hope that parents today will see the potential for misuse and keep an eye on the quantity of time they or their darlings spend before the video screens. I admit that I am as drawn to the visual medium as anyone else, but I also believe that such entertainment can become a "weight" (Heb 12:1-2) that impedes spiritual progress. I hope we can find the off buttons before we are enslaved by our visual idols. Just a thought
Posted by Ed Skidmore at 1:23 PM