Learning the truth about "Cap and Trade" 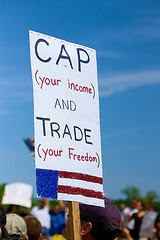 Our Congress is now debating the merits and options of enacting "Cap and Trade" here in the United States. In case you're wondering, this system of carbon taxation has been in place in Europe for several years. It is the carbon tax that causes gasoline in Europe to be so expensive that few who live there can afford any kind of motor vehicle. Most get by there with bicycles and public transportation because that is the only option they can afford. If "Cap and Trade" is enacted here you can expect gasoline to go back to and beyond the four dollar mark immediately. The same will be true for your electric bills which will likely double especially if your electric company still powers its generating plants with coal. I read an article that estimates the average cost per family to be around $3,000.00 per year greater than what we are paying for energy now.

The dirty secret of cap and trade is that it is regressive in nature. That means that it hurts the poorest among us the most. According to the Department of Energy the average American Family pays 3.5% for energy expenses as a part of disposable income, but among low income families the cost for energy is as much as 14%. (p. 263, Politically Incorrect guide to Global Warming, C. Horner) What will cap and trade do to them? Nothing but harm!

And another secret you'll not hear about is the answer to the question, "Will cap and trade actually make a noticeable difference in the emission of greenhouse gasses?" For example, is it working in Europe where it has been in place for years? The answer is a big fat, No!

"Despite more than a decade of coercive policies and energy suppression in the name of 'global warming' and their staggeringly high energy taxes, Europe is not curbing its CO2 emissions...since Kyoto (1997) Europe's carbon dioxide emissions have increased dramatically. Since 2000 they are increasing three times as fast as America's." (p.283-4, C. Horner)

Well, if enacting cap and trade here in the U.S. would not actually make any difference with regards to green-house gas emissions, why go to all that effort and expense? The final dirty secret is the real reason behind this maneuver revealed by this quote from former French President, Jacques Chirac given in a speech at COP-6, Nov. 2000, "Kyoto is the first component of an authentic global governance." (p.301, C. Horner)

There you have it! Cap and trade, a byproduct of the Kyoto Summit, will hurt the poor (and the rest of us as well), won't actually change anything about our climate proposals, and finally is yet another link in handing over our national sovereignty to global powers. You have every reason to educate yourself about cap and trade and to speak up about it to Congress while you still have a little room to wiggle. If you say nothing, and it passes, you will have lost your chance to protect our nation's ability to direct its economic future. Our Senate already rejected cap and trade the last time it was brought up by a vote of 95 to 0. Perhaps you can have an affect on the next vote if you speak up now. Just a thought.
Posted by Ed Skidmore at 4:58 PM