New Fascination with the clouds 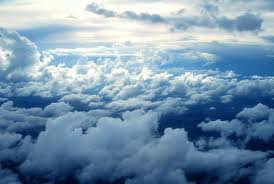 There's a trendy new feature in the computing world known as "cloud" computing. I have run into it in several different ways. When we updated our word processor to the newest version, it came with access to a cloud based storage area which we could access from anywhere in the world and on any computer. Naturally, I set up my cloud site and uploaded a file to it just to show that I could. I haven't gone back to it since, but it is reassuring to know that it is up there somewhere (in the clouds) waiting for me whenever I decide I need it (assuming I remember my password for getting into it).
More recently, I downloaded an app (application) for my recently purchased i-pad, and it also came with ability to access a cloud storage area called "Dropbox." Well, to be truthful, I was more impressed with Dropbox than I was with the app that told me about it. Susan and I have installed Dropbox on all of our computers and mobil devices, and have started placing files we want to share in our dropbox rather than e-mailing them to each other. With two gigs of storage space it holds bigger files than we can e-mail to each other, and each of us can update files in it at will. I've also noticed that various apps can connect to the Dropbox automatically.
I'm told that because of cloud computing, we will eventually be weaned from the need for hard drives on our computers. I assume that's a good thing since my iphone and ipad don't have hard drives.
I know all of this sounds new and state of the art and all, but perhaps this isn't as trendy as we might be led to believe. I remember a Bible verse where we were promised that we would meet Jesus someday in the clouds. 1 Thess. 4:17 says, "After that, we who are still alive and are left will be caught up together with them in the clouds to meet the Lord in the air. And so we will be with the Lord forever."
So then, clouds are nice, but God was evidently impressed with them long before any of us were paying attention to them. He promised us that we would meet his Son when he comes back in the clouds. I like the idea of cloud computing, but I love the fact that God had something in mind for the clouds long before we became fascinated with them.

I precoged this. Synchronicity. Meet Jesus in the cloud storage. You misunderstand one thing here. Bible says stuff. Look. The oldest trick in the book. Misassociation. Mental. The dead shall rise first. Sew it together. You got nothing. The servers are unsecure as Hell.

This ain't Christ, anti if anything.


Be careful to consider all scripture when attempting to overide the associatiave errors and you might just find there are none.

DreamHost is definitely one of the best hosting provider with plans for all of your hosting requirments.