Tools in the Boat? 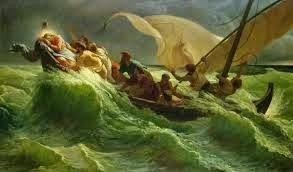 I was reading an article by Bill Johnson in Spiritual Java (Chapter 4) which dealt with Jesus asleep in the boat during a storm (Mark 4:35-41). Near the end of the chapter, Bill mentioned that there were tools available in the boat to help Jesus' disciples deal with the storm. Well, that was certainly a new concept to me. I was aware that Jesus himself was in the boat, and in the end, he was the tool they used to deal with the storm. They called out to him and woke him from his sleep so that he could speak to the storm and calm it. But were other tools available to these men within the boat?
Knowing that this was a fishing boat, and that at least four of the men were fishermen by trade, I'm confident there were plenty of tools aboard for the contingencies that often accompany fishing excursions. Perhaps they had something like a bucket that could be used to bail out water which was beginning to fill the bottom of the boat during the storm. There was a tool that could be used to deal with at least one effect of the storm. No doubt there were ropes that could be used to tie down equipment and secure the sails so that the wind would not blow the boat as much. But along with the normal fishing tools in the boat, what other tools might have been available.
The conversation between Jesus and his men in this account gives us a clue as to other tools they could have used. Waking Jesus from a sound sleep, the men said to him, "Teacher, do you not care that we are perishing?" Now, is it just me, or does that sound rude to you? In my 42 year ministry I've had times when people have made similar statements to me. What the disciples were doing was questioning Jesus' motives. Are you so oblivious to our need that you will ignore it and prove your lack of concern for us?
How could Jesus possibly sleep through such a tempest? Well, for one thing he had just finished an extremely busy day and was exhausted from extended ministry. For another thing, Jesus had no reason to fear because he knew the power that was available whenever it might be needed. At that moment, what Jesus knew was evidently not shared by his fretful men. When Jesus rebuked the storm and calmed the waves with these words, "Peace, be still," his next words to his men were, "Why are you so fearful? How is it that you have no faith?" Those words reveal to us another tool that was within the boat that night.  The prayer of faith was a tool Jesus' men could have used had they been aware of it. What Jesus did to the storm was not beyond the realm of possibility for his men. After all, on another occasion, Peter successfully exited the boat and walked on water... at least for a little while. Did the disciples have the tools to calm the storm? Well, the answer is yes...and yes. Jesus was there, and he was the tool they ended up using, but another tool could have been used without needing to awaken Jesus from a much needed sleep. In the same way that Jesus later told his men they could rebuke mountains and make them move, they also had what was needed to calm the storm, but lacked the faith to say what needed to be said. When Jesus rebuked his men for lack of faith, their response was exceeding fear and this odd statement, "Who can this be, that even the wind and sea obey Him!"
Once again, these guys amaze me! First they are rude when waking up their teacher, then they claim to not even know who is with them in the boat! On another later occasion Peter will confess that Jesus is the Messiah, the Son of God. Sadly, it looks like on this occasion everyone is oblivious to much of what and who Jesus really is. They seemed to know that waking Jesus was a step in the right direction, but they bypassed other things they might have done on the way to this ultimate step.
The lesson for us to learn from this account is that we also have tools available to us for dealing with our own storms. Sometimes God will allow winds and waves to come our way for the purpose of shaping us into more mature citizens of His kingdom. His desire is not to sit idly by and watch us be swamped, but to see us use the tools available to us for overcoming what ever storms we may face. We have tools like the Word and prayer augmented by belief to use at just the right times.
Are you facing a tempest? Look around and see what tools are available in your boat. Use them in faith toward God and see what happens to your personal storms. Don't accuse Jesus of not caring about your situation. Don't plead and beg as though you serve a selfish and easily peeved deity. Instead, speak bold words of confidence in God's power and see what comes to pass around you. Do you know who is with you in the boat? Do you know all that He can do? Do you understand anything about what he is preparing you to do? Use the tools you have, and deal with the storms you face.
Posted by Ed Skidmore at 10:33 AM