Guest Blog from Dr. Mark Berrier: The Magi and the Star of Christmas 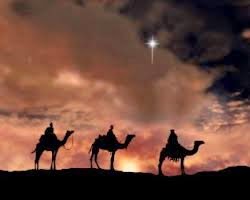 THE MAGI AND THE STAR OF CHRISTMAS

The Gospel of Mark has nothing at all about the birth of Jesus. The Gospel of John describes the birth in symbol—“word” and “light” entering the world. Luke’s Gospel has the story of the angels and the shepherds. But only Matthew writes about the Magi and the star.
Several questions arise from Matthew’s record: 1) Where were the wise men from? 2) How could they know that the star meant a king was born? 3) What was the star? 4) When did the star appear?
The word “Magos” (singular of “Magi”) comes from an Iranian word for “great one.” Magi were an upper caste in the Middle East—both Persia and Babylonia—for many centuries. They were the scholars who studied the stars and struggled to discern how events in the heavens might impact the earth. But they were not the first who saw the star of Christmas.
Chinese star-gazers saw it first. For millennia the Chinese had kept close watch on comets and other heavenly phenomena. According to ancient Chinese records a spectacular comet with a very long tail appeared in 5 BC and was visible to them for over 70 days. This comet is the only celestial phenomenon recorded between the period 20 BC and AD 10, according to ancient Chinese records. This comet fits uniquely with the birth of Christ, because Luke 2:2 reveals that Quirinius was governor of Syria when Jesus was born. Quirinius was governor of Syria the first time from 6 BC to 4 BC. After the Chinese had tracked the movements of the comet, the Magi would have been able to see it, too, since it began its journey "in the east," just as Matthew said.
This one obvious astronomical object, and the only one, fits with the account of the star of Bethlehem that Matthew 2:9 records—a comet with a long tail. Comets are known to appear suddenly and to seem to travel slowly across the night sky at a typical rate of 1-2 degrees per day. Matthew says that the star "stood over" the place where the baby Jesus lay. A long-tail comet with its head pointing downward can seem to point to a place on earth. This would dramatically fit with the description in Matthew of the star. The Magi would have arrived several weeks after the birth of Jesus—at the house where the holy family then resided (Matthew 2:11).
Several cities and villages in Persia (today’s Iraq and Iran) claim that the wise men came from there. We don’t know exactly where they were from or even how many of them there were.
Could those eastern wise men have known of Balaam’s fourth oracle back in Numbers 24? He predicted that “…a star will rise out of Jacob; a ruler’s scepter will rise from Israel.” Perhaps when Balaam returned to the Middle East, that story was spread, and the Magi may have heard of it. Tradition has given these Magi special names and even numbered them as three, since there were three gifts—gold, frankincense and myrrh. They have been called “three kings,” but there is no evidence for this. Also interesting is the fact that these gifts were unique. Gold is from the earth; frankincense is of the heavens, a symbol of prayer in the Bible. And myrrh is for the burial of the body, used in ancient times in Egypt and learned of by the Jews. Jesus was like these gifts—from heaven, from earth and would be buried, briefly.
Joseph was warned in a dream to leave Bethlehem and go to Egypt to escape the slaughter of the innocents. The three gifts are how the holy family was able to survive economically in an Egyptian city among other Jews. Then at the death of Herod the Great in 4 BC, the holy family returned to Israel, but being warned in a fourth dream, Joseph removed the family to Nazareth of Galilee. And so Jesus would be called a Nazarene.
Either way, Jesus’ birth was actually in 5 BC, making our calendar, which was invented later on, inaccurate. This New Year would actually be 2018, rather than 2013, if it were based in the birth of Jesus the Messiah.
Posted by Ed Skidmore at 12:53 PM