Speak up while you can still be heard! 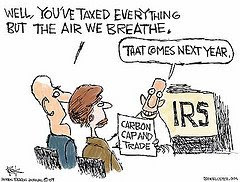 I'm writing today to inform you about H.R. 2454 which was introduced by Henry Waxman and Edward Markey in the House of Representatives and is now being considered. This bill, called the American Clean Energy and Security Act is set for a vote before Memorial day on May 25th. The bill is over 900 pages long and even the summary of the bill presented by the Energy and Commerce committee is 22 pages long. You can see the summary on the web at http://energycommerce.house.gov/Press_111/20090515/hr2454_summary.pdf

The part of this bill that concerns me the most is the part that would enact "Cap and Trade" standards on the US as they were put in place about 12 years ago in most of Europe. I have already written about cap and trade in another blog so I won't repeat myself here, but you can see what I wrote there if you wish: http://skiddingintohome.blogspot.com/2009/04/learning-truth-about-cap-and-trade.html

Let me cut to the chase on my greatest concern. Imposing Kyoto Treaty style carbon emission standards on our nation will impact our economy in the worst way possible. It has been estimated that the average American family will eventually see between three to four thousand dollars annually sucked out of their personal disposable income in the form of higher gasoline prices (new taxes), higher electric and natural gas bills, and other possible increases from products impacted by these new government regulations. This is an especially bad idea to even consider while we are in the midst of an economic crisis, but Congress is hell bent on getting this through with the same "hurry-up" mindset they had with the various bail outs of the past few months.

The problem is that we only have a few days to even let our reaction to this bill be known before it sails through the House and on to the Senate. Please let your congressman know this week about your concerns. Here in San Antonio the TEA Party group is planning a protest tomorrow, on Tuesday, May 19th at 11 a.m. at the office of Charley Gonzalez office at 727 E. Durango Blvd. in downtown San Antonio. If you plan to attend you can notify the organizers by sending an e-mail to nocapandtrade@wildblue.net They need an estimate so they can notify the police how many people they expect at that location. Charley Gonzalez is on the House Energy Committee. He needs to hear our voices. now. I have also sent an e-mail to my rep. Cero D. Rodriguez. You should do the same with yours. Time is of the essence. Please don't sit this one out.
Posted by Ed Skidmore at 11:09 AM

There is a chance you qualify for a new government solar energy rebate program.
Click here and discover if you qualify now!