North Korea on my mind 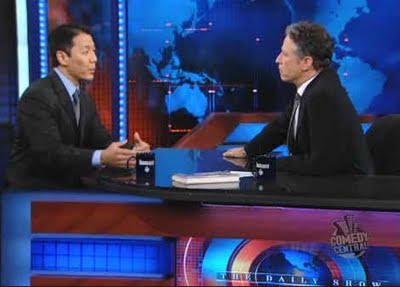 Mike Kim with John Stewart on the Daily Show

I have North Korea on my mind. Why, you may ask, would I think about that country among all possibilities? Well, it all started when my brother-in-law, Bob told us he would be traveling there for a few days with a group from his church. Then, coincidentally, Susan saw an interview on the Daily Show between John Stewart and Mike Kim. Here is the link to that interview: http://www.thedailyshow.com/watch/tue-june-30-2009/mike-kim


Susan googled Mike Kim and found a web site about him and his ministry http://www.crossingbordersnk.org/


Then, she ordered a copy of his book on Amazon.com. The book is entitled, "Escaping North Korea," by Mike Kim, Bowman and Littlefield Pub. 2008.


After she finished reading it, I started and just finished it today. What did I learn from the book?

North Koreans are the world's most repressed people. The government of Kim Jong Il forbids common citizens from owning cell phones, computers, books or magazines or cd's or dvd's from other countries, Bibles,...actually the list goes on and on. The word for God has been expunged from the North Korean language. Christianity is forbidden on penalty of death. Furthermore, common North Koreans are not allowed to travel outside the country. The country also does not provide citizens with basics such as electricity or medical services. There is very little in the way of public transportation. The unemployment rate is 85%, and those who work rarely get paid, but if they do receive a paycheck it averages the equivalency of about $1.25 per month. Most North Koreans eat only two meals a day of corn gruel which are starvation rations. Because of this North Koreans are stunted in growth and very sickly. When they manage to sneak across the border into China they are often ill and near the point of death. It was also sad to discover that China has a policy of repatriating North Koreans it discovers within its borders back to North Korea where they are immediately imprisoned, tortured, and sometimes killed. Though I could write pages on the hardships the North Koreans must endure, what is even more astounding is to discover what Mike Kim wrote about Christianity in North Korea.

There are estimated to be around 100,000 Christians living in North Korea in spite of the governments fanaticism over eradicating it completely. Many of these secret Christians became believers when they snuck across the border into China and learned about God from the house churches operating near the border. In spite of China's policies against North Korean refugees, Christians in China will often hide these pitiable folks and take care of them. If North Koreans go back across the border to their homes, government officials will interrogate them, and the first questions they ask are these: "Did you meet any foreigners?" "Did you meet any Christians?" If they answer "Yes" to either of these questions, they are immediately placed in captivity.

Though there is much more I could share from the book, I would simply urge you to read the book for yourself. It will break your heart, no doubt, but it will also enable you pray more effectively for the unfortunate slaves of this repressive Communist regime. Though there are many places in the world where Christians are mistreated and even martyred, this place is by far the worst of them all. We must pray for our brothers and sisters there in North Korea.
Posted by Ed Skidmore at 4:06 PM