Remembering the blessings of our past 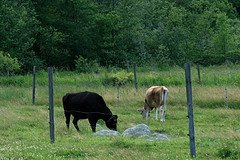 Cow pasture purchased in 1961 for church property:
I remember the words of Psalm 78 which admonish us to remember the blessings of our past: Psalm 78: 2 I will give instruction and explain the mystery of what happened long ago. 3 These are things we learned from our ancestors, 4 and we will tell them to the next generation. We won't keep secret the glorious deeds and the mighty miracles of the LORD.
Times like this call us to remember those who sacrificed so that we could enjoy the blessings they sacrificed to supply to us. This congregation, Castle Hills Christian Church, had its beginnings in 1961 when Fred and Chris Eppinger opened their home to a Bible study group made up mostly of members of the Woodlawn Christian Church. This small group wanted to start a new church on the north side of town, and they found a 6 acre tract of land on West Ave. outside of town which was being used as pasture land. It had a small 4 room farm house with a tack room attached to it. Twenty three people agreed to purchase the land and collected $7,000 for a down payment and took on a mortgage of $14,000 to purchase the land. They converted the tack room to serve as a sanctuary, remodeled the farm house, and added 4 new rooms to serve as class rooms. The new church congregation called Harry Owens to be their founding minister.
The church grew rapidly, and 4 years later they made plans to build a 300 seat sanctuary even though their attendance at the time averaged about 100 people. Talk about vision! They had the foresight to plan for a congregation three times the size as they were at that point. The new sanctuary was going to cost $125,000 to build (half a million in today’s dollars), but they sold church bonds to provide the funding and by 7 years later they had filled that building and made plans to build two other buildings to support it.
In 1971,the office and gym building were both built at the same time for $96,000, again using a church bond program to provide the funds. And with each building program, the church grew and filled up the new space.
Harry Owens retired in 1984, and the congregation called me to come in January of ’85. Almost immediately, we began to run out of space again. We added two huts for class rooms the summer of ’85, and built a two story addition in ’89, at a cost of over $170,000, built entirely by donations as they came in over a three year period.
The new worship center was by far, our boldest endeavor involving the generosity of our members who begin a process of giving in ’98 and paid off the $1.1 million in its entirety last year.
I’ve said all that in order to point out that through our 48 years as a congregation, our people have gladly sacrificed to provide what we now enjoy as a congregation. Through these years our people have raised more than $1,5 million + interest, in order to provide us with a campus worth more than $4 million today. The amazing thing is that not one of the original 23 charter members who started this church, nor their children or grandchildren are here in the congregation at this point in time. This means that none of those pioneers did what they did for themselves or for their heirs. They sacrificed for us. They gave their time, energy and money for us (people they would never see face to face).
Along with the debt of gratitude we owe to our loving God and Savior, we also owe our thanks to the literally thousands of brothers and sisters who have come through this congregation in what ever time they were among us. Some were here for only a few months, others for decades, but they all made a difference in the time they were here. They all contributed to what we are today and what we enjoy today as a 48 year old congregation. I thank them for every hour they donated to work here, every dollar they gave here, every class they taught here, every song they sang here, every prayer they prayed for this congregation here. I thank people others in the congregation don’t remember like Norah Lebohm, Olyvia Sawicki, Art Smith, Emery Jackson, Harry and Annelle Owens, Bob Leatherwood, Gwen Petcavage, Carl Stenger. And I thank people the congregation does remember like Tony Hero, George Farwell, Phil and Cindy Adams, Harrison and Denise Hassle, Cory and Lindsay Roach, and others like them who have come through here, made their contribution and then moved on.
And in the end, isn’t that what we all will do? We are all temporary here. Some may enjoy 40 or more years of faithful, though temporary service with this congregation, others will spend far less time here, but the real issue is not the length of time here, but the quality of time spent here. Just a thought.
Posted by Ed Skidmore at 7:44 PM

Hi Pastor Ed, I just read your article "Remembering the blessings of our past". It is incredible to look back at life and "remember" where and how God met and provided in His perfect way and in His perfect timing. I moved as a young single woman, just graduated from Purdue University as a 1 year-old believer in Jesus Christ. The summer before arriving in San Antonio, I prayed for a church home - knowing how important it was as a babe in Christ to do so. While looking for my new apartment, I drove past Castle Hills Christian Church and attended there my first Sunday in Texas. At that time, new visitors did stand, and I was glad for that. A precious woman, Bonnie Edmonds, slipped me a kind note at the end of the service, along with her phone number. That was the first of many new beginnings in my life with Christ. Jim and Joy Morgan were also a gift from God, and I was reunited with them twice this past year, once in the spring with a ministry we had in San Antonio, and then this past summer while volunteering at Bible Study Fellowship HQ. What an unbelievable blessing.I got to see Vera Reeves while there too. I was baptized as a believer at Castle Hills, began singing in the choir, special music and working in the children's ministry there. MANY years have passed since then on this marvelous journey with the Lord.Currently,my husband Doug and I serve with Athletes in Action, a ministry of Campus Crusade for Christ. I remember well the blessings of my past, always grateful for the new beginnings each day as well. I am thankful to the Lord for Castle Hills Christian Church and all who were the hands, feet, ears, and voice of Jesus to me at that time.I moved away, was married, and my husband I have 3 beautiful daughters. He also loves to golf, but doesn't get to go much. It's exciting to see the Lord's faithfulness to Castle Hills, as well as the people's faithfulness to God. In Christ, Caroline Hefner Busch