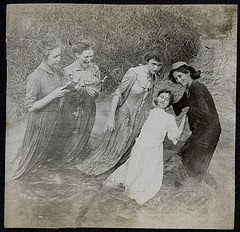 Through the years I have dealt with the subject of baptism in various sermons and lessons as well as talking about baptism in private counseling situations. Once again the subject of baptism rises in terms of trying to explain to new-comers what our church believes and teaches about this topic. My purpose here is not to give an exhaustive discourse on baptism, but to introduce the subject for the purpose of providing simple understanding of the meaning behind the practice. Furthermore, the practice I am referring to is that of baptism by immersion as a means of connecting with Jesus Christ and becoming a part of the body of Christ which is His church. Baptism by immersion by believers has the following symbols or meanings associated with it:
1. Burial: The Apostle Paul explains the link of baptism with the death of Christ when he writes, in Romans 6:3-8 (NIV) 3 Or don't you know that all of us who were baptized into Christ Jesus were baptized into his death? 4 We were therefore buried with him through baptism into death in order that, just as Christ was raised from the dead through the glory of the Father, we too may live a new life. 5 If we have been united with him like this in his death, we will certainly also be united with him in his resurrection. 6 For we know that our old self was crucified with him so that the body of sin might be done away with, that we should no longer be slaves to sin-- 7 because anyone who has died has been freed from sin. 8 Now if we died with Christ, we believe that we will also live with him.
It is the burial aspect of baptism that explains why we immerse baptismal candidates. In fact, the very word, “baptizo” in the Greek language means to dip, plunge, submerge, sink, or bury. It is the word used to describe what happened to ships which were lost at sea. They were baptized into the ocean. In much the same way we are baptized into Christ as a means of retelling the story of what happened to Christ on and after his crucifixion. Christ died, was buried in a tomb, and came forth from that tomb at his resurrection.
Our baptism retells what happened to Jesus and declares that the same thing happens to us in our baptism. We go down in the water as Jesus was buried in the tomb, we are under water, as Christ was three days in the tomb, and we come up from the water as Jesus came back from the dead. Our baptism allows us to participate in Christ’s death, burial, and resurrection. The burial aspect of baptism also declares that we have died to our old lives of sin and disobedience and have come into a newness of life in our connection to Christ. We are new creatures because we are now in Christ. We are also declaring by baptism that we are dead to the world of sin we once knew, and separated from the slavery to sin that once dominated our lives. We have died to everything that once held us back from knowing and loving God, but we are alive to everything God desires to give us and share with us because of our connection to Christ. (part 2 and 3 will be in later blogs)
Posted by Ed Skidmore at 10:56 AM