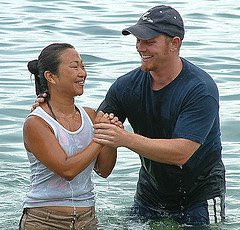 2. Circumcision:
Once again, the Apostle Paul presents another symbol attached to baptism in Colossians 2:10-14 (NIV) 10 and you have been given fullness in Christ, who is the head over every power and authority. 11 In him you were also circumcised, in the putting off of the sinful nature, not with a circumcision done by the hands of men but with the circumcision done by Christ, 12 having been buried with him in baptism and raised with him through your faith in the power of God, who raised him from the dead. 13 When you were dead in your sins and in the uncircumcision of your sinful nature, God made you alive with Christ. He forgave us all our sins, 14 having canceled the written code, with its regulations, that was against us and that stood opposed to us; he took it away, nailing it to the cross.
Notice that verse 12 connects baptism to circumcision in a very direct way. Understand that circumcision was the sign of the covenant between God and Abraham and all his descendants (Genesis 17:10). All boy babies were to be circumcised on the 8th day after birth by a ceremonial removal of foreskin to bring the boy into God’s covenant with Israel. This ceremony was so important that Moses almost lost his life when he angered God by failing to circumcise his own son (Exodus 4:24-26).
Though the act of circumcision was ceremonial in nature, it also had deep spiritual meaning in terms of cutting off the principle of the flesh which was always fighting against the will and way of God. Therefore Jewish teachers would often talk about such things as uncircumcised lips (Exodus 6:12), hearts (Leviticus 26:41), or ears (Jeremiah 6:10). To them, circumcision was not just a fleshly operation but a change in a person’s life when they finally dedicated themselves fully to God and separated themselves from anything against God’s will.
In Colossians 2, Paul tells us that our baptism is a circumcision of sorts done without hands when God makes us alive with Christ and forgives all our sins. Like circumcision, our baptism is the sign of our covenant with God, and it is also an example of the principle of cutting off the flesh which is continually fighting against God’s will and way. Baptism is our way of confessing that we have died to that old way that was against God, and that we are a new creation (2 Corinthians 5:17) in loving connection to God through Christ.
Posted by Ed Skidmore at 11:07 AM