A lifetime of Pres. Obama? 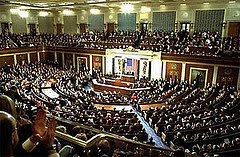 Photo of Joint Session of U.S. Congress
I received an e-mail today about House Joint Resolution 5. I must admit I had heard nothing about it before today, and nothing has been on the news about it. As you can see below, this was introduced on January 6th, '09 by Rep.Jose Serrano D.N.Y. I wondered if this was a hoax so I looked it up on Snopes.com and there was nothing there about it one way or another. Am I the only one who thinks this is about as bizarre as it could get? I feel sorry for the folks in Iran who had their election stolen from them and have to endure another term from a despot like Ahmadinejad. Now it looks like we are setting things up in this country so that our current leader can become a leader for life!
I can't help but assume that shady dealings by groups like Acorn is what gave the Dems the extra 8 million votes they needed to put Obama into office. And now we can assume that a continuation of those shenanigans will keep him in office, and the repeal of the 22nd Amendment will keep him there indefinitely. Below, is the actual wording from http://www.govtrack.us/. Read it and groan with me.


This version: Introduced in House. This is the original text of the bill as it was written by its sponsor and submitted to the House for consideration. This is the latest version of the bill available on this website.

Proposing an amendment to the Constitution of the United States to repeal the twenty-second article of amendment, thereby removing the limitation on the number of terms an individual may serve as President.

IN THE HOUSE OF REPRESENTATIVES

Mr. SERRANO introduced the following joint resolution; which was referred to the Committee on the Judiciary

Proposing an amendment to the Constitution of the United States to repeal the twenty-second article of amendment, thereby removing the limitation on the number of terms an individual may serve as President.

Resolved by the Senate and House of Representatives of the United States of America in Congress assembled (two-thirds of each House concurring therein), That the following article is proposed as an amendment to the Constitution of the United States, which shall be valid to all intents and purposes as part of the Constitution when ratified by the legislatures of three-fourths of the several States within seven years after the date of its submission for ratification:

‘The twenty-second article of amendment to the Constitution of the United States is hereby repealed.’.

You can look this up on this site: http://www.govtrack.us/congress/billtext.xpd?bill=hj111-5

Here is another site: http://www.washingtonwatch.com/bills/show/111_HJ_5.html
Posted by Ed Skidmore at 4:22 PM

Mr. Serrano of NY may have submitted this bill this time but it has apparently been making the rounds in front of our legislators for quite some time. It is a blatant attempt, in my opinion to consolidate power in the person of the President by keeping him in office, practically forever; an
absolute threat to individual liberties and the Constitution by
making it practically impossible to utilize the vote to implement
needed change. Rather than eliminate presidential term limits,
they should be imposed on Congress
as well, limiting all of them in the House and Senate to no more than two consecutive terms. These
parasites already feel altogether too entitled to their benefits
package and the disparity between them and the constituencies they are purportedly in office to SERVE!
No one in this country should trust anyone in government. It is the only sector of the economy that is expanding, costing already hard pressed taxpayers altogether too much in profligate programs that do not work, exactly like the Congress. If we were smart, we'd vote out every incumbent up for re-
election in the upcoming elections, regardless of party! Do you think that might send them a message even the most corrupt and inept of them would comprehend?